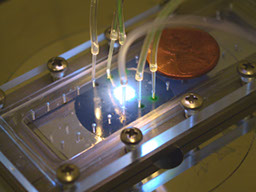 We have developed a hydrogel-based three-channel microfluidic device that is capable of generating a stable linear concentration gradient for the study of both bacterial and mammalian cell chemotaxis.

Three parallel microfluidic channels are patterned on a 1mm thick agarose gel membrane. The linear chemical gradient is established in the center channel via diffusion.