The challenges in imaging moving cells are the speed and phototoxiticity. To circumvent this problem, we developed a defocused microscopic particle tracking method to track moving cells in 3D and in time. The idea is to utilize the defocused ring to determine the third dimension.

Here is a movie of escherichia coli swimming in free suspension. The rings are caused by the defocused bacteria. Using the defocused tracking method, we are able to follow the bacteria swimming dynamics in real time. READ MORE. 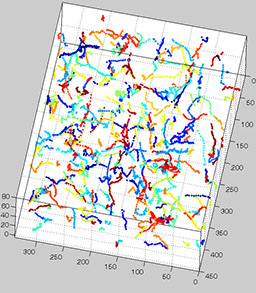 As we enter the era of quantitative biology, there is an immediate need for a new set of quantitative tools to probe the spatial and dynamical information of biological entities (such as bacterial cells, proteins) at micro and nano scales. Here we present the tracking method and the software package that we use to track micron meter scale particles in all four dimensions (x,y,z,t) using a single CCD video camera. If you decide to use our software, please cite publications by Wu et al., AEM, 2007).  READ MORE.

This set of MATLAB functions extracts the locations of bacteria from microscopic images. READ MORE.