August 22-26, 2022: Wu will be giving a presentation on ‘Biological materials promote cell-cell communication’ at Lorentz Center in Netherlands.

June 21, 2022: Congratulations to Fangchen and Larissa, whose joint work on the growth of photosynthetic organism titled "Microscope-based light gradient generation for quantitative growth studies of photosynthetic micro-organisms"  is published in Lab on a chip.

June 17, 2022. Wu will give a talk at LADYHX, Ecole Polytechnique, France, Cell and tissue mechanics.

June 13, 2022. Wu will give a talk a symposium on cell migration, College de France, Cell language: Roles of cell-environment communication in tumor invasion.

April 21, 2022. Wu will give a talk at the physics colloquium, SUNY Buffalo. Cell language: Roles of cell-environment communication in cell migration.

March 14-18, 2022. We will be at American Physical Society March Meeting in Chicago.

Fangchen Liu  -- Effects of light and nutrients on the growth of algal cells revealed by a microfluidic platform. (5:12 -5:24 AM, Thursday, March 17)

October 1, 2021. Congratulations to Young Joon Suh, who has successfully passed A exam and now is an official PhD candidate in the Biological Engineering at Cornell.

March 17, 2021. Fangchen's  work on algal cells got published in Bulletin of the American Physical Society.

March 16, 2021. Young Joon's  work on chemotaxis got published in Bulletin of the American Physical Society.

August 17, 2020. Congratulations to our collaborator Jenn Schwarz, who received a NSF award on our collaborative work: Modeling Tumor Invasion with Spheroids Embedded in Extracellular Matrix. An associated postdoc position is here.

April 20, 2020. Wu will speak in  Physics department at University of Oregon. Cancelled due to COVID-19.

April 6-9, 2020. Wu will speak at the KITP conference at UC Santa Barbara. Frontiers of Active Matter.

March 2-5, 2020. We will be at American Physical Society Marching meeting in Denver. Young Joon Suh --  Chemotaxis of Breast Tumor Spheroids in 3D ECM; YuLing Huang -- A tug of war between cell-cell and cell-ECM interaction during tumor invasion; and Fangchen Liu  -- Synergistic effects of nitrogen and phosphorous on the growth of algal cells revealed by a microfluidic platform

Jan 14, 2020. Wu will give a talk at the physics department of Georgia Tech. Biophysical force regulation in cell migration 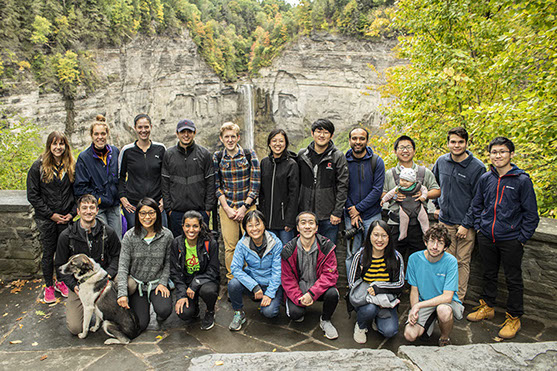 05/01/2019 – See news coverage on Young Joon's work here, Risk of metastatic cancer increases in those who have diabetes.

04/12/2019 – Mingming Wu is giving a seminar at Biophysics seminar series in Physics department at Syracuse University.

03/29/2019 – Mingming Wu speaks at a workshop on Mathematics of form in active and inactive media, at Newton Institute of Mathematical Sciences, Cambridge, England. 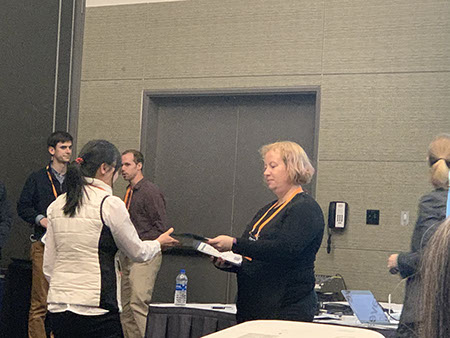 10/03/2018 – Congratulations to Fangchen who received a well deserved best poster award at the CNF annual symposium. 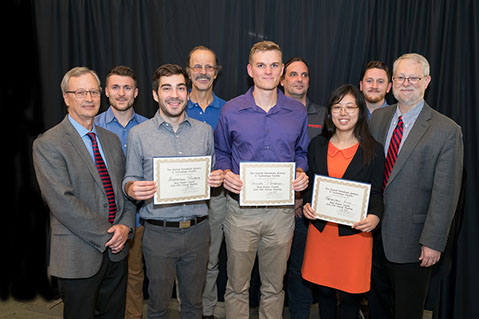 05/27/2018 – Congratulations to Yujie and Claire for completing their Honors Thesis and for graduation! 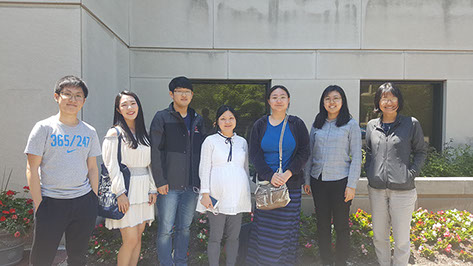 09/14/2017 – Congratulations to Yu Ling, Yujie, and Min for getting the best poster award at the CNF Annual Meeting.

08/02/2017 -- Congratulations to Yu Ling whose review paper on Microfluidic modeling of biophysical microenvironment in tumor cell invasion has been accepted by 'Lab on a Chip'.

08/01/2017 -- Congratulations to Dr. Wu for a R01 award from the National Cancer Institute, entitled: Microfluidic platform for tumor cell invasion. This project is in collaboration with Prof. Segall at Einstein College of Medicine.

05/01/2017 -- Congratulations to Dr. Wu for an award from the USDA, entitled: Nanoliter Habitat Platform For Understanding Harmful Algal Bloom. This project is in collaboration with Prof. Ahner and Winans. We thank ACSF for a prior pilot project fund for this research.

04/27/2017 – Congratulations to  Claire and Jane, each was awarded a Summer Research Fellowship from The Cornell Engineering Learning Initiative. Job well done.

11/21/2016 -- Congratulations to Matt, whose paper on cell-ECM cross talk is in press in PNAS. "See Cornell chronicle news."

11/17/2016 -- Wu will speak at the International Conference on Nanotechnology Applications and Implications of Agrochemicals towards Sustainable Agriculture and Food Systems, Beijing, November 17-18th, 2016.

10/21/2016 -- Congratulations to Wu, who was elected as an American Physical Society (APS) fellow. "Read more about this news"

08/30/2016 -- Congratulations to BJ and Jason, their paper on Electron acceptors and bacterial cell chemotaxis has been accepted by ' Frontiers in Microbiology'.

6/20/2016 -- Former Postdoc Chih-Kuan Tung speaks at the conference on Smart and Active Matter in Syracuse, NY on : "Viscoelasticity promotes collective swimming of sperm"

04/28/2016 -- Congratulations to Matt, who was selected as an CALS Outstanding Graduate Teaching Assistant, a well deserved title.

04/18/2016 -- Congratulation to Megan Powers who was awarded an Engineering Learning Initiative research award for her proposal on Quorum sensing and algal blooms.

03/14/2016 -- Congratulations to YuLing Huang and YuJie Ma for getting the best poster award at the BEE, our department annual symposium. Job well done !

02/25/2016 -- Wu speaks at the Symposium on Frontiers of Chemical Science and Engineering: Environment and Sustainable Development, Beijing China.

12/09/2015 -- Congratulations to BJ and Tim for the acceptance of their paper on EPJP. The title of their work is: Epidermal growth factor promotes a mesenchymal over an amoeboid motility of MDA-MB-231 cells embedded within a 3D collagen matrix

12/08/2015 -- Congratulations to Yu Ling for successfully passing the A-exam, an important step towards a PhD degree.

07/31/2015 -- Wu's interview on our work of cancer cell migration in microfluidics has been featured in BioTechniques by Sarah Webb, see "The Depths of Cell Migration"

07/31/2015 -- Congratulations to Beum Jun Kim! His paper on "An array microhabitat system for high throughput studies of microalgal growth under controlled nutrient gradients" has been accepted for the publication in Lab on a Chip.

07/17/2015 -- Congratulations to Yu Ling Huang! Her paper on "Interstitial flows promote an amoeboid over mesenchymal motility of breast cancer cells revealed by a three dimensional microfluidic model" has been officially accepted by Integrative Biology.

03/13/2015 -- Congratulations to Chih-Kuan Tung! His paper on ' Microgrooves and fluid flows provide preferential passageways for sperm over pathogen Tritrichomonas foetus' has been officially accepted by PNAS.

03/04/2015 -- March 04, 2015, Tung will present a poster on "Interstitial flows promote an amoeboid cell phenotype and motility of breast cancer cells" at the at the APS March Meeting, San Antonio, TX

02/10/2015 -- Febuary 10, 2015, Hall will give a talk on "Cell migration forces within three dimensional elastoplastic collagen matrices are modulated by fiber crosslinking" at the Biophysical Society Annual Meeting, Baltimore, Maryland

02/03/2015 -- February 03, 2015, Congratulations to Chih-Kuan Tung whose manuscript on Emergence of upstream swimming via a hydrodynamic transition was accepted by Physical Review Letters.

10/22/2014 -- October 22, 2014, Mingming will give a talk on "Physics of Directed Cell Migration" at the Physics department colloquium at Rochester Institute of Technology, Rochester, NY

03/26/2014 -- March 26, 2014, Chih-Kuan gives a talk at the Cornell University Reproductive Physiology/Endocrinology Seminar on "Surface Topography and Fluid Flow Provide a Preferential Pathway through the Cervix for Sperm", Ithaca, NY.

03/06/2014 -- Chih-Kuan will give a talk at the American Physical Society Meeting on "Swimming against the flow - An orientational disorder to order transition", Denver, Colorado, USA.

09/24/2013 -- Congratulations to Alyssa Fiore who won an undergraduate research award from the Cornell Engineering Learning Initiative on her research proposal entitled "Swimming against the flow -- Roles of fluid flows in cell migration."

09/19/2013 -- Congratulations to Chih-Kuan Tung who won a poster award at the CNF annual symposium. This is to recognize his work in modeling sperm microenvironment using a microfluidic device. This work is in collaboration with Alyssa, Flor, and Susan.

09/14/2013 -- Wu will give a seminar on Physics of directed cell migration, at a symposium Frontiers in Biophysics at Cornell University, Ithaca, NY.

07/31/2013 -- Congratulations to Matthew Hall for passing A Exam on the development of a 3D Single Cell Traction Microscopy.

07/01/2013 -- The Atkinson Center for a Sustainable Future (ACSF) has awarded Wu and Ahner a grant to pursue their work on developing a microfluidic platform for the studies of the growth of cynobacteria, see "2013 Cornell AVF Grant Award News"

07/01/2013 -- Congratulations to Beum Jun Kim, who has been promoted to senior research associate position, and our collaborator Herbert Hui, who will become Joseph C. Ford Professor of Engineering, starting July 1st, 2013.

04/17/2013, Scottsdale, AZ -- Kim will present a poster at the NCI's Fourth Annual PS-OC Network Investigators' Meeting on the 'A novel statistical approach for characterizing the heterogeneity in tumor cell dissemination'.

03/21/2013, Baltimore, MA -- Tung will give a talk at the APS March Meeting 2013 on 'A contact line pinning based microfluidic device for modeling intramural and interstitial flows'.

03/21/2013, Baltimore, MA -- Tung will present a poster at the APS March Meeting 2013 on the 'Development of a microfluidics model for studying migration of sperm in the female reproductive tract'.

03/13/2013 -- Congratulations to Matt and Feng for the acceptance of their paper on 'Towards 3D Traction Microscopy within Collagen Matrices' in the Experimental Cell Research.

03/12/2013, Columbus, OH -- Wu will give a talk in the Mathematical Biosciences Institute at the Ohio State University on the 'Directed cell migration: Experiments and Modeling'.

03/08/2013, Syracuse, NY -- Wu will speak at the seminar series in the physics department, Syracuse University on the ' Physics of Cell Migration'.

02/06/2013 -- Our work on cancer metastasis is featured on Nature, titled "Tracking metastasis and tricking cancer"

11/01/2012 - Pittsburgh, PA BJ Kim will speak at the 2012 Annual AICHE Meeting on ' Differential effects of Chemokines and Growth Factors on Tumor Cell Migration Using a 3D Microfluidic in Vitro Model'.

09/13/2012, Ithaca, NY-- Wu will speak at the seminar series of Civil and Environmental Engineering Department at Cornell University on 'Biologically Inspired Microsystems Engineering'.

07/26/2012, Heidelberg, Germany -- Wu will speak at 2012 Microfluidics Conference organized by EMBL on ' Microfluidics for Cancer Chemotaxis.'

04/06/2012 -- Congratulation to Matt and Rong for the acceptance of their paper on the development of a 4D traction force microscope in Biophysical Journal.

03/30/2012 Arlington Texas, TX -- Congratulations to Erica Castillo, a visiting undergraduate researcher with our lab in the summer of 2011, who became the first Goldwater Scholar in University of Arlington, TX.

03/15/2012 Houston, TX -- Congratulations to Beatriz Ascencio, who was awarded a summer research fellowship from the Methodist Research Institute.

03/07/2012 5:00pm, Duffield Hall, Ithaca, NY --Congratulations to TianYu Wang who received a third place poster award at the annual Bioexpo symposium organized by the Institute of Biological Engineers for his work on the tracking of stem cell lineage in 3D.

03/02/2012  11:45am, Riley Robb, Ithaca, NY--  Hall will give an invited talk, Wang, Hannnanta-Anan, Kim, Kasyap and Tung will each present a poster about their research at the Annual Research Symposium in the Biological and Environmental Engineering department  on the development of a 4D traction force microscope.

03/01/2012  2:30 pm, Boston, MA. Wu will give an invited talk at the American Physical Society meeting on bacterial chemotaxis and microfluidics.